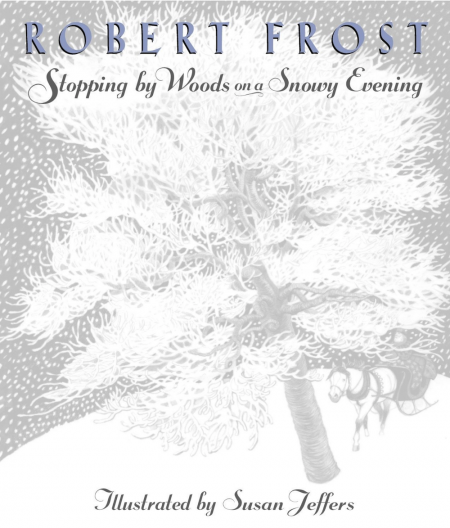 Robert Frost's Stopping By Woods on a Snowy Evening

It was with his fellow New Englanders that Robert Frost (1874-1963) first became known for his poetry. Over twenty years later Frost published his first book. He went on to win a record of four Pulitzer Prizes and became one of the most well-known poets of his era. The illustrator of Stopping by Woods on a Snowy Evening, Susan Jeffers, worked on this book from her studio that is surrounded by woods and animals, which she loves to draw. Susan has worked for many publishers and has authored a few books of her own, including Three Jovial Huntsmen, a Caldecott Honor Book. These illustrations in Stopping by Woods on a Snowy Evening were done with pencil, pen, and ink.

It is interesting to note how much the illustrations play into the story of this book. With the text, the imagery of the illustrations fill in the blanks and bring life and detail to the words. Whether this is the exact meaning that Robert Frost had in mind, we do not know. For the children, this influence that the illustrations have to the book creates a story and fills it with life. As the adults, this is also a powerful influence that we must just remember was added by the illustrator. On the darkest night of the year, a man, his sleigh, and his horse head into the woods. The man stops for some time to watch the snow falling through the trees. His horse becomes anxious to keep going as there is not a farmhouse near. Regardless, they stay awhile as the man observes and plays amongst the trees and animals. Before long they continue on as the man has obligations to meet and there are miles to go before they sleep.

Some of the activities in this unit are making popcorn snowballs, mixing up and using "snow" paint, and pine cone weaving.